Those were the days. Available from your local shop or on your digital device. 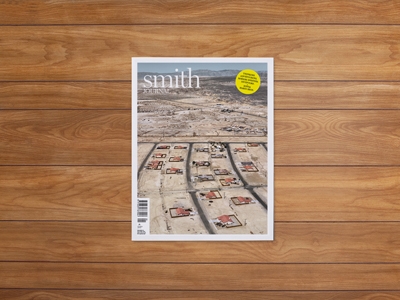 I have a new story, Two Pound Rainbow, in the first issue of Review of Australian Fiction for 2014. The review is now entering its third year, and has established itself as a unique part of the Australian literary landscape, not least for its fantastic design. I’m pleased to be sharing the issue with fellow Canberran Nigel Featherstone, who I interviewed recently for Island Magazine.

You can read Two Pound Rainbow, which is about a lake and a shack, as well as Nigel’s story, In the Happy No-Time of His Sleeping, by grabbing the review or by subscribing. 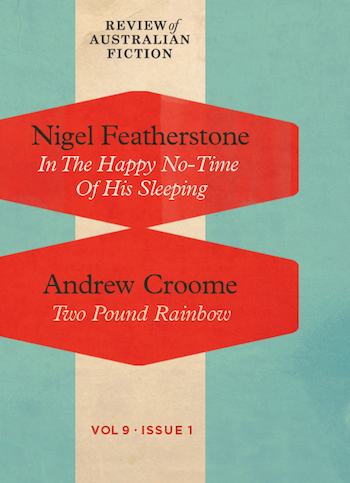 I’m excited that one of my pieces on Mt Stromlo is featured in Best Australian Science Writing 2013 from NewSouth Books. Edited by Jane McCredie and Natasha Mitchell, this year’s collection is introducted by Tim Minchin and features a long list of great scientists, writers, journalists, poets and commentators.

As NewSouth say, ‘Read this. Your brain will love you for it.’ 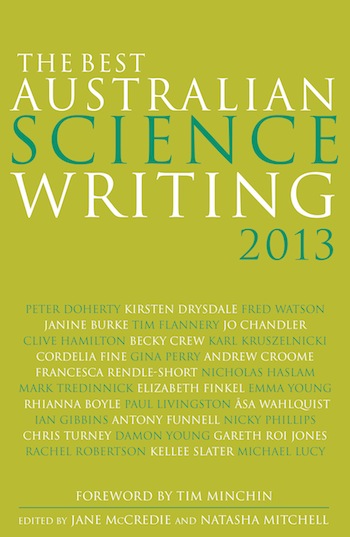 Stay tuned for details of launch events in both Sydney and Melbourne soon.

I’m looking forward to attending the National Library’s Writing the Australian Landscape conference in August, where I’ll be chairing a panel with Geoff Page, Matthew Higgins and Paul Daley. Our topic will be ‘Imagining the Capital: Words about Canberra’. 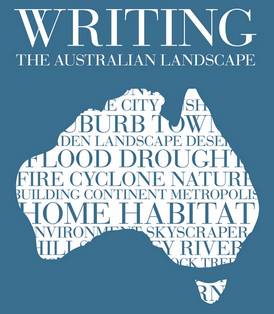 The NLA’s conferences are great events - not least because the all the sessions occur in the same space, which keeps everyone on the same page and allows for some discussion and back-and-forth in and between the panels. If you’re in Canberra, definitely consider coming along.

I’m looking forward to heading to Sydney for the Sydney Writers’ Festival, where I’m appearing on a panel with John M. Green, Dawn Barker and Tom Wright entitled Fiction on the Edge of Reality. If you’ll be at the festival, please come along.

You Are Here Festival

Thanks to Scissors Paper Pen I’ll be joining a panel at the You Are Here festival entitled ’We’re all in it together (in the same plague pit)’:

Profound work or a splash of words in a journal — Canberra is arguably a small pool when it comes to its artists. Does that oblige writers, musicians, painters and dancers to come together to create artistic strength and community, or are we better off believing it’s every artist for themselves, and the rest comes down to tidy PR and a keen audience? Is there a better, wiser, or other, option?

On the panel will be Shane Breynard (director of Canberra Museum and Gallery), writers Ryan Lindsay and Tara Cartland, as well as Scissors Paper Pen’s Duncan Felton.

I have a piece on the Mt Stromlo Observatory in Meanjin’s recently released Canberra Issue.

I was lucky enough to visit Mt Stromlo for a two-week residency as part of the National Year of Reading, with the help of Libraries ACT, and I wrote the piece during my time there. 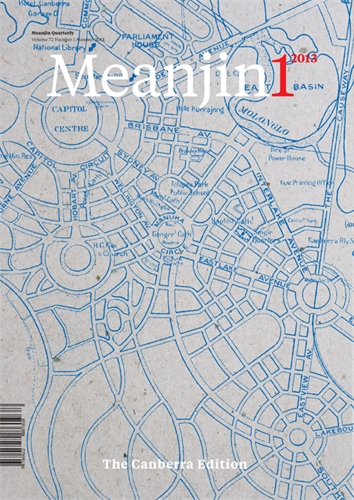 In March, Meanjin visits Canberra in the city’s 100th year to take the pulse of our elusive, much-maligned Capital.

Gideon Haigh takes an in-depth look at a burgeoning Australian phenomenon—The Prime Minister’s Library, and how this American tradition of venerating past leaders is being adopted on our own shores. Lorin Clarke takes a holiday to Canberra and finds a city at a tipping point, where the old clichés ring hollower than ever before and Andrew Croome visits Mount Stromlo, remade and reinvigorated after it’s destruction in the tragic 2003 Canberra fires.

André Dao takes us behind the brutal façade of the High Court building into the struggle over how the law should be represented in bricks and mortar and Frank Bowden invites us into the infectious underbelly of Canberra’s clean streets and healthful citizenry. Drusilla Modjeska talks to Anne-Sophie Hermann about the particular opportunities and responsibilities that come with being a diplomat’s wife and Paul Daley delves into Canberra’s murky past and addresses that age-old question, what exactly does the word ‘Canberra’ mean, anyway? And in Meanjin Papers, David Headon takes us on a journey with Walter and Marion Griffin.

Marion Halligan remembers the first years of what was meant to be a brief affair with the city, Sonya Voumard remmebers the strange life of a journalist in the middle of the action, but far from home and Yolande Norris is tired of having the same old conversations about the place she loves.

There is fiction by Canberrans whose names you’ll know, like Dorothy Johnston and Alan Gould, alongside powerful new voices like Melanie Joosten. We present a vibrant collection of poetry from around the territory from John Foulcher, Elizabeth Lawson, Adrian Caesar and much, much more.

With drones making their way into art and popular culture, I joined Jason Di Rosso and Cassie McCullagh for an episode of The List on ABC Radio National - featuring hip hop, games and other things.

Interview on the craft of writing with Verity La

Nigel Featherstone at Verity La has been generous enough to ask me a few questions about my writing and craft.

The interview is here and you can also subscribe to Verity La from their front page.

I’m excited to be able to travel west for the Perth Writers Festival in February, where there’s a great line-up, including Margaret Atwood, China Miéville, Anna Funder and many others.

In the Dead of Night

Parker Bilal’s Dogstar Rising is an atmospheric mystery set in Cairo; Andrew Croome’s Midnight Empire is a powerful thriller based in Las Vegas; while The Midnight Promise by Zane Lovitt is an intriguing collection of mysteries peopled with colourful characters. Three rising stars of the crime genre discuss their noirish new novels.

The Devil is in the Details

From poker dens to emergency rooms, researching a novel can take you to strange and unusual places. Andrew Croome and Natasha Lester discuss the intriguing details they needed to perfect while writing their new novels.

The gripping new thrillers by Andrew Croome, LA Larkin and Steve Worland will keep you up late at night. They talk about building and maintaining suspense in their new books.

Peter Pierce, editor of the Cambridge History of Australian Literature, has given Midnight Empire a great review in The Age and the Sydney Morning Herald.

Here’s a little of what he said:

a nerve-racking narrative of betrayal and vengeance… Midnight Empire is the finest Australian thriller since David Francis’ Stray Dog Winter(2008). Take this book off the shelf (and pay for it) as soon as you can.

'Whose eyes are in the skies?' - article for ABC's The Drum

I’ve written a short article on drone technology and surveillance for The Drum.

It was great to be able to speak about Midnight Empire and drones with Jonathan Green for Radio National’s Sunday Extra program.

The audio can be found here.

On 19 September, the Lowy Institute hosted a panel, ‘THE DRONES ARE COMING: BORDER PROTECTION, PRIVACY, WAR AND MORALITY IN THE REMOTE-CONTROL AGE’, featuring ABC Foreign Correspondent Mark Corcoran, The Interpreter editor and blogger Sam Roggeveen and myself.

Video highlights are available at vimeo.com/lowyinstitute, including Sam speaking to Mark and myself, and the full event, in which Mark recounts his experience commandeering a drone to use as an ABC camera platform.

Nigel Featherstone has kindly posted online his profile of myself, as published in the Canberra Times a few weekends ago.

Nigel is the founder and editor of Verity La, author of Fall On Me and Remnants and many short stories as well as the forthcoming novella I’m Ready Now, and it was great to be able to chat with him about Midnight Empire.

You can read the profile here, and browse Nigel’s blog here.

Join the ABC’s Mark Corcoran, editor of The Interpreter Sam Roggeveen, and myself for a discussion of all things drones at the Lowy Institute on Wednesday 19th of September.

If you’ve not seen it, Mark Corcoran’s ‘Rise of the Machines’ report for Foreign Correspondent is chilling, fascinating and a must-watch.

Andrew Croome, winner of the 2008 Australian/Vogel Literary Award, is back with his latest novel Midnight Empire – set in the heady world of Las Vegas where all that glitters is not gold.

Andrew will be in conversation with Melbourne’s very own Miles Franklin-shortlisted Tony Birch, author of Blood, Father’s Day and Shadowboxing.

Don Anderson has reviewed Midnight Empire in the Australian.

If you’re a subscriber, you can read it here. If not, here’s some of what Anderson had to say:

Croome has been compared with more than one distinguished writer of contemporary political and espionage thrillers, and that comparison seems just if limiting. On the evidence of this novel he deserves comparison with no lesser figure than Don DeLillo.

Midnight Empire has all the satisfactions of a skilfully plotted detective fiction, while being something much more.

It is a fresh and a singular achievement.

Midnight Empire will be launched in Canberra at Electric Shadows on Thursday the 6th of September 2012.

You are invited to help celebrate the launch of:

Join us for a launch in Canberra or Albury.

Las Vegas, Nevada. Young Australian computer programmer Daniel Carter has arrived at the heart of the American war machine – the drone program at Creech Air Force Base, Indian Springs.Naive, untested, but keen to make a difference, he is plunged headlong into America’s surreal battle against its enemies in the Middle East – a battle fought at a distance of 7,000 miles from a city where nothing is real.As geographic and political boundaries blur, Daniel enters into an unlikely romance with a professional poker player, Ania. But when the hunt for an Al Qaeda master-mind ramps up in the skies over Peshawar, and American pilots begin to die in the suburbs of Las Vegas, events take a devastating turn.A novel of a new kind of war, of love and connection in the modern age, Midnight Empire is a powerful thriller that takes us to the troubling epicentre of a foreshortening world. It is a taut and at times terrifying vision of a world without frontiers, a novel about dangerous new realities and how they threaten to transform us. I’ve reviewed Mark Aarons’ The Family File in The Australian.

In conversation about his latest novel -

Cost: $25 per person for Lunch Complimentary Glass of Champagne/Wine

Midnight Empire will be launched in Albury as part of the Write Around the Murray Festival.

To be launched by Pamela Wallace

The book is being launched alongside Robyne Young’s The Only Constant and Dorothy Gilding’s Letters from the Front. You can read the festival’s full program here.